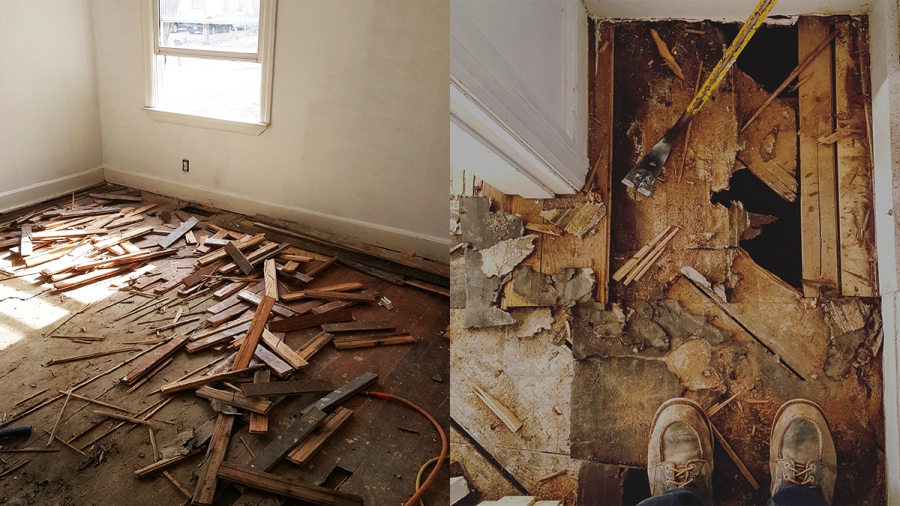 When we first walked through our house, we knew we were going to have some flooring issues to deal with. We had hopes of finding some decent hardwood flooring below all the laminate and carpeting, but alas, the extensive damage just didn’t work out in our favor. We even contemplated for a few days about just redoing the living room hardwoods, and then adding in new wood throughout the rest of the house. Well, when I was pulling out some baseboard trim and noticed a piece of water damaged hardwood, I decided to pull up a piece. As it turns out, the living room flooring was not original, and it was probably installed about 15 years old or so (from when they renovated the house back in 2002 I am guessing) so pulling it up didn’t feel like we were losing any of the homes old school original character.

When we went hardwood shopping, we really didn’t know what to expect. Since our subflooring is all kinds of wanky, janky, and wavy (old joists to blame!), that ruled out using anything prefinished. Doh! So of course, the other route, was to go unfinished and sand the heck outta them and hope for the best! We ended up going with some 3.25 inch wide Red Oak. If time was on our side, we would have gone with White Oak, but they said it was about 3 weeks out. Ahhh well!

Instead of staining the wood, we decided to go with a crystal clear satin, water based poly. In doing so, it allowed us to keep the space as bright feeling as possible. Furthermore, we went with water based over oil based since it wouldn’t give the wood any orange or yellow’ish tinting down the road.

The poly went down relatively easy, but it did come with a couple hiccups. Well, more so, our HVAC system is to blame for that. Since our system is so vintage’y old, it’s just limping along at 15-20%, and as a result, the house was not getting warm enough to cure the poly.  We ended up having to get a couple of infrared space heaters to keep the place above 70 degrees just so the poly would cure properly. 3 coats later, it was all done!

View all posts by 991sqft